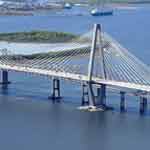 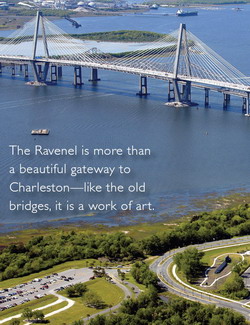 I resisted the temptation to drive the new Arthur Ravenel Jr. Bridge the first day it opened to traffic. Well, I did until dinner time. My daughter, Sam, and I had gone out for a salad at an eatery around the corner. On that two-minute drive home, I said, “Do you want to drive over the bridge?”

A quick nod and we drove into history, along with thousands of other people eager to share our experience. I’d never seen bridges like this before I moved to Charleston in the ‘70s.

The Pearman was still relatively new,a modern marvel with a reversible lane and the signals to prove it. It seemed a pretty sturdy way to get to what was then advertised as “the tomorrow side of the river.” The problem with going to Mount Pleasant—or the beaches— was the return trip. The Grace Bridge both fascinated and frightened me.

Believe me when I say I found the trip truly heart-stopping. I sat, paralyzed, holding onto the passenger seat with both hands. I tried holding onto the door handles, but thought better of it. In the ‘70s, cars didn’t have safety features. 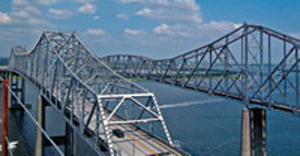 To clutch the door handle was to potentially fling myself out of the car altogether. I didn’t dare breathe until we were safely approaching the East Bay Street exit.

My then-husband thought my fear was ridiculous. He shook his head as he zipped in and out of traffic on those two pitifully narrow lanes. I was scared beyond belief as I watched the railings flash by so close I could have touched them—if I could have opened the window.

“Just don’t look,” he said. “Close your eyes and it won’t be a problem!” It sounded like a good idea at the time, but this is even worse than eyes open. Much worse! I squeezed my eyes shut, sat back and relaxed for what I know was a small eternity. I carefully opened my eyes only to discover that we had moved forward perhaps 20 feet. That meant we still had about two-and-a half miles to go before I could breathe again.

Over the years, my fear of driving across the “old” bridge became legend. At first, only my family was aware—as in “Now children, Mommy is driving across the bridge, so we need to be very, very quiet so that we won’t accidentally drive off.”

Believe me, you could have heard a pin drop in that car. Other times I’d suffer panic attacks —is this how a stroke feels, I wondered? Even in the dead of winter, my hands were slick with sweat as I tried to maintain my grip on the steering wheel. Finally, a few years ago, I decided to give up driving on the Grace altogether. I became a laughing stock among my friends and co-workers when I requested they drive me across the reversible lane to downtown.

Funnily enough, it was only the Grace Bridge that bothered me. I actually loved driving over the “new” bridge, the Pearman. Just as high, with views just as spectacular, crossing that bridge counted as a great Lowcountry drive unless, of course, you were unlucky enough to be stuck in the rushhour traffic or the aftermath of a stalled car or accident.

When I first heard about the construction of a new bridge, I didn’t believe it would come about any time soon. Things move exceedingly slow, at best, in Charleston. Something as expensive and massive as this bridge could surely never be built during my lifetime. I was wrong. The Arthur Ravenel Jr. Bridge began to rise from the river bed.

At first, there was not much to see but before long, the towers were touching the sky as hundreds of workers toiled round-the-clock to close the gaps. It stood silently by—a masterpiece of man and equipment—as traffic continued to flow north and south a stone’s throw away. During the last few months, as the spans edged closer together, I could feel the excitement mounting. With each day, a few more inches were gained. I knew the builders, from the crew leaders to the lowliest workers, must have been bursting with pride at their accomplishment. I could hardly wait to get on the new bridge myself after watching the construction all those many months.

Though it was hot as the dickens, I rode the school bus up to the center of the bridge to join the thousands of walkers. I became one of the gawkers, marveling at the amazing views and snapping photos against the backdrop of the bridges, both new and old. For the first time ever, I looked at the top of the superstructure on the old bridges. And as I walked, I realized the bridge had been waiting, too—waiting for the people of the Lowcountry to breathe life into it. But, as it awakened that weekend, I couldn’t help but feel a tug of sadness for the two old ladies whose lives were ebbing away. I’ve been driving the “Cuzway,” as it is fondly known to locals, for about a year now and I can tell you one thing: it is a wonderful thing to behold.

The Ravenel is more than a beautiful gateway to Charleston—like the old bridges, it is a work of art. But the best part? It’s so big and wide, I never feel scared at all. I have finally conquered the bridge.