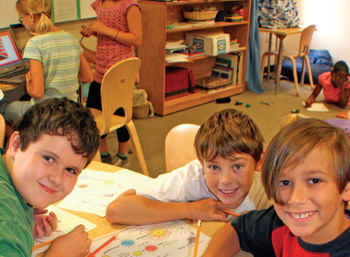 I was surprised myself to find a school inside I’On. I’ve passed the entrance to the Mount Pleasant neighborhood many times, and I’ve noticed the Charleston-style architecture of the homes and the compact shopping area just off the Mathis Ferry Road roundabout. So when a co-worker mentioned the school, I had to see for myself.

Tucked into a tiny corner of the neighborhood, the school doesn’t look like much at first glance, but I see a rendering of its dream leaning on an easel as I enter the office. A volunteer is bustling around as Jody chats animatedly on the phone.

“Let me show you around the school,” Jody says, after I explain my mission to her. I’m working on a series of articles destined to become an I’On lifestyle magazine. She’s thrilled at the chance for publicity that will further her mission. It is clear that Jody loves educating children and that she sees something special in each one of her young charges. Normally, she wouldn’t allow an interruption like this at the beginning of the school year, she explains, but she can’t resist showing me the students interacting with their teachers.

“We’ve been raising money for a new school building,” Jody told me. “We’re not there yet, but people help out in many ways. For instance, the deck we’re walking on was donated.”

84 Lumber chipped in with the initial deck two years ago; this year, the school was lucky enough to receive another donation from Guy C. Lee, which extended the deck to include two additional classrooms and a technology lab. The East Cooper Montessori Charter School was founded in 2003 with 44 students and has been growing steadily since. The lower and upper elementary schools, which serve grades 1 through 7, share the current complex of mobile classrooms, but everyone anticipates the opening of the new building for the 2007-2008 school year.

A common misconception about the school is that it is private.

“We’re a public school,” Jody laughs, “but no one seems to know that. Just last week, a parent in I’On called to ask me what the yearly tuition was.”

East Cooper Montessori is part of the Charleston County School District but, as a charter school, operates independently. While not necessarily separate but equal, Jody likes the fact that she can lead the school the direction she wants. As she leads me from classroom to classroom, I can see the students actively engaged in learning, although it hardly seems like work. In one room, a teacher is on the floor with her group of children; in another, a teacher challenges the older students.

It’s a different way of educating, to be sure, but 100 years of successful learning is proof that it works. The premise of the Montessori method is that children are respected as being different from adults as well as from other children. In addition, proponents believe that young children possess an extra sensitivity to learning. Seeing it in action was a learning experience for me. It almost made me wish my kids were still in school. Almost.