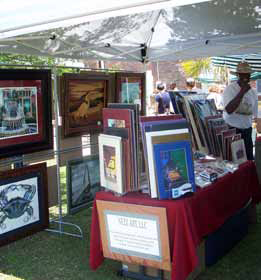 The Sweetgrass Cultural Arts Festival provides an excellent opportunity to take advantage of great food and entertainment and a vast array of the Charleston area’s signature souvenir, all the while enjoying coastal Carolina’s near-perfect late-spring weather. But the event, held each year in Mount Pleasant, South Carolina, also can be a learning experience, a chance to delve deeply into the history of a people and an art they have practiced for more than three centuries on two continents.

“The festival serves as a venue to educate locals as well as tourists about the heritage of the Gullah-Geechee people, their culture and traditions,” according to Sweetgrass Cultural Arts Festival Project Director Thomasena Stokes-Marshall. “We also have entertainment, gospel songs, folklore, arts and crafts, and, of course, the largest display of sweetgrass baskets anywhere in the Lowcountry.”

For those who tire of eating, playing games, listening to music and looking at baskets, the festival offers another interesting option. Two films will be shown: “Grass Roots: The Enduring Art of the Lowcountry Basket,” and “Bin Yah: There’s No Place Like Home.”

“Grass Roots” follows Mount Pleasant basket makers as they harvest sweetgrass, weave their baskets and discuss the meaning of their work. 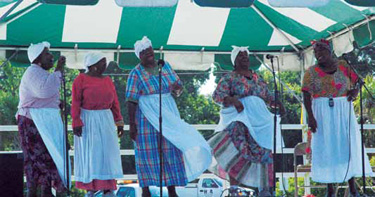 “Bin Yah” is a documentary that considers how growth and development have threatened historic African-American communities in Mount Pleasant. In the words of local African-American residents, the film “explores the culture, the history, the importance of land and the concept of home, giving a voice to those who seldom have a chance to be heard.”

The festival is scheduled from noon to 8 p.m. Saturday, but the festivities actually get underway Friday at 6 p.m. in the Cooper River Room at the Visitors Center. “The Real Taste of Gullah Cuisine,” in its second year, will feature the creations of some of the area’s top chefs, including Kevin Mitchell, an instructor at the Culinary Institute of Charleston at Trident Technical College. The evening’s activities include an unusual fashion show – featuring hats, evening purses and table vases made of sweetgrass. Musical entertainment will be provided by vocalist Zandrina Dunning, violinist Daniel D., Devon Gary on the saxophone and poet Samara Simmons. To complete the evening, world-renowned artist Jonathan Green, whose studio is on Daniel Island in nearby Berkeley County, will speak on Gullah culture.

The fun continues Saturday afternoon, but, in the morning, attendees will have the chance to listen to and talk with area scholars during a seminar concerning health, education and land issues in the African-American communities along the Gullah-Geechee Heritage Corridor. Established by Congress in 2006 to recognize the important contributions made to American culture and history by African- Americans originally brought to the Southeast coast as slaves and their descendants, the corridor runs from Wilmington, North Carolina, to Jacksonville, Florida.

An important part of that history has to do with sweetgrass baskets. Through oral history, the technique can be traced from West Africa to the plantations in the South to modernday South Carolina. Though baskets were made to store food during and after the era of slavery, they were not sold commercially until well into the 20th century. As the story goes, according to an article written by J.V. Coakley, Ida Jefferson set up the first sweetgrass basket stand on Highway 17 in the 1930s after losing her job as a day laborer. The road had been completed recently and tourists had started to use it to travel from the North. Her immediate success spawned competition from other basket makers. Today, dozens of artisans sell their baskets along the stretch of Highway 17 that runs through Mount Pleasant.